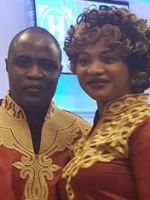 William accepted Christ and was baptized 1980 in Nimba, Liberia, West Africa and was called by God to Christian Ministry to proclaim the Gospel to the world since 1992. His active service started as a training pastor and interpreter in the Faith Baptist Church in Guiglo City, Cote d’ Ivoire, West Africa. 1994 he was awarded a scholarship by the Liberian Baptist Mission Board and sent to San-Pedro, Cote d’ Ivoire. Where he was enrolled at the Baptist Bible College and graduated with a degree in Theology, with emphasis in Christian Ministry. Upon graduation, he took over the Grace Baptist Church as senior Pastor in Guiglo, Cote d’ Ivoire and was ordained into full time Ministry for the Lord by the ordaining council in Guiglo, Cote d’ Ivoire. Pastor Payne has served in several capacities and for several Christian organizations in Africa and the United States. William is also a teacher by profession. He graduated from the Webbo Teacher’s College in Webbo District, River Gee County, Liberia, with emphasis in class-room Management and General Teaching Methods.

He is married to his beautiful wife, Mrs. Eliza Gbalee Payne. They are blessed with seven (7) living children.